Deep-tech innovation begins in people’s heads. The 12th edition of the Aachen Technology and Entrepreneurship Congress (ATEC) once again proved that it takes creative minds who are willing to “dare the impossible”. And like-minded people striving to make this ambition a reality.

On 17 May, the Aachen start-up ecosystem demonstrated that two years of mainly virtual events didn’t break the spirit to come together to make a lasting impact on society. With more than 1,000 on-site participants in Aachen, the ATEC12 had sold out early. In addition, hundreds of technology and entrepreneurship enthusiasts joined online. 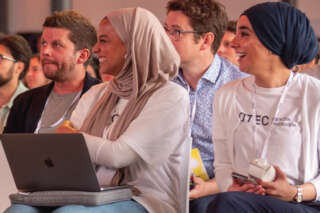 The keynotes of investor, founder and author Frank Thelen and science journalist Ranga Yogeshwar set the tone for the day. How will AI change the future? What role will play in our everyday lives? Why are mistakes important in growing as an entrepreneur? What will our lives look like in the future? Is 9-5 still up-to-date? What about sustainability, digitalization, deep tech, and women in tech? The participants had the chance to dive deeper into these topics in panel discussions with experts in the field.

Without further ado, Melanie Raidl (Handelsblatt) opened the Sustainability Panel with what is arguably the most pressing question: How can start-ups have real impact in terms of sustainability? Her guests Lara Obst (THE CLIMATE CHOICE), Christian Kroll (Ecosia), Patrick Tobler (NFT-MAKER), and Jan Ossenbrink (Global Founders Capital) elaborated on crucial role of start-ups in demanding new ways of thinking, challenging industry leaders and policy makers, and implementing sustainable alternatives to existing processes and technologies.
In the Digitalization Panel, Kirstin MacLeod (Meta) asked Katharina, Riederer (eco.mio), Julian Kögel (Y GO), and Michael Riegel (Comtravo) about their perception of how digitalization is changing the business world. The Deep Tech Panel was all about how to manage going from researcher to entrepreneur. To discuss this crucial step in all its complexity, Prof. Max Lemme (Advanced Microeletronic Center at RWTH Aachen), Daniel Schall (Black Semiconductor), and Marius Rosenberg (RWTH Innovation) examined the opportunities and hurdles from a research, founder and transfer perspective, and outlined support mechanism to facilitate the process. Last but not least, Magdalena Gorecki (digitalHUB Aachen) invited Nina Wöss (Female Founders), Najat Messaoud (Microsoft), Ann-Kristin Mackensen (NFT-MAKER) to share their insights into navigating the tech industry as part of the highly anticipated Women in Tech Panel. 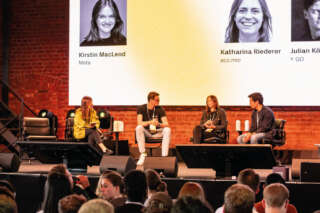 THE STATE AND FUTURE OF THE AACHEN START-UP ECOSYSTEM

The questions and problems raised in the panel discussions certainly also apply on the local level, as a talk about the future of the Aachen start-up ecosystem revealed. As key players in the regional ecosystem, Oliver Grün (digitalHUB Aachen e.V.), Marius Rosenberg, and Brenda Ritter (Collective Incubator) illustrated the collaborative effort of creating a disruptive environment for Aachen and beyond. Just how relevant the big questions are for young start-ups in the region became apparent in the Oecher Foundertalk with ACCURE Battery Intelligence, Clinomic, FibreCoat and gemineers – the four Aachen-based teams who made it into Germany’s Top 50 Start-ups of 2021, who shared their stories and insights on what the Aachen start-up ecosystem is about.
In addition to learning from successful founders first-hand, the on-site participants had the chance to meet young entrepreneurs at the start-up fair, and engage in a hands-on workshop with Martin Schilling (Techstars Berlin) on Finding Your North Star: Clarity On Direction Drives Fundraising Success.

The Sustainability Panel was followed by a pitch battle between eight highly energetic start-ups exhibiting the huge innovation potential of universities in North Rhine-Westphalia and its European neighbors. With AllCup (Westfälische Wilhelms-Universität Münster), Assemblean (Universität Paderborn), CDL (Universität zu Köln), Gemesys (Ruhr-Universität Bochum), Kasaira (Technische Universität Dortmund), Urban Ray (RWTH Aachen), Timetap (Maastricht), and Zeiko (Lüttich), the universities funded by the Exzellenz Start-up Center.NRW initiative as well as one Belgian and one Dutch university each sent one team to Aachen to compete against each other. In the afternoon, the top 3 were announced: Timetap (€30,000 by Dieter von Holtzbrinck Ventures), Gemesys (€3,000 by TechVision Fonds), and CDL Therapeutics (Plug & Play). 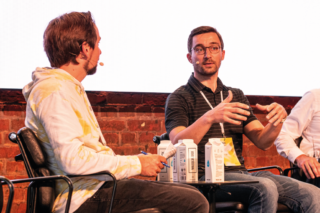 FIRST ROUND OF THE SPIN-OFF AWARD 2022

After the pitch battle ceremony, Prof. Malte Brettel, Vice Rector for Business and Industry at RWTH Aachen University, and Marius Rosenberg, Managing Director Exzellenz Start-up Center at RWTH Innovation, took the stage to honor outstanding start-ups with academic roots in Aachen with the RWTH Spin-off Award. In the first round of the Spin-off Award 2022, the following five start-ups took home the only official award for spin-offs from the university:

Prof. Malte Brettel applauded the winners for their outstanding contribution to the start-up ecosystem in Aachen and the future of our society, as they are role models for students and researchers at RWTH and aspiring entrepreneurs in Aachen. With their innovative solutions they not only drive change in their respective field, but also create a meaningful, positive impact on people and planet. Applications for the second set of this year’s Spin-off Award winners will open in late summer 2022. 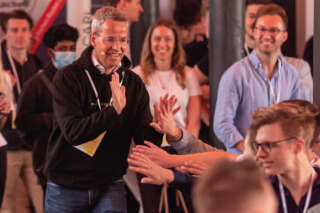 The ATEC12 is the top-event of the first-ever STARTUP WEEK AACHEN to celebrate the growth, power and collaborative spirit of our regional start-up ecosystem. In a kick-off event on Monday, the hosts from digitalHUB Aachen e.V., the City of Aachen, FH Aachen, and RWTH Innovation officially launched the action-packed program with events on entrepreneurship, scaling, digitalization, and innovation. Find your next event here.

Given the positive feedback from the participants, the initiators at digitalHUB Aachen e.V., Collective Incubator e.V. and RWTH Innovation are already looking forward to next year’s ATEC. But before, they are joining the organisers of the STARTUP WEEK AACHEN in welcoming everyone interested in entrepreneurship at the various events coming up this week. 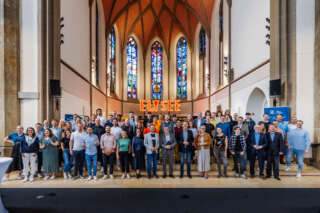